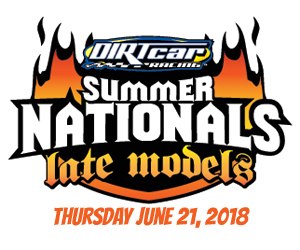 Bad Brad is Bad Fast in Victory at Spoon River

The winningest Late Model driver in Spoon River Speedway didn’t feel like he had a winning car heading into Saturday night’s Monical’s Pizza Pro Late Model feature at the high banked 3/8-mile oval. Just minutes before the division took to the track for that feature, a frustrated Brad Denney said, “still got a lot of work to do to figure out this new car, it’s not doing what I expect it to do, that’s for sure.”

Maybe the car heard the driver’s complaints. Less than 20 minutes later, a smiling Denney took photos and accepted congratulations in Victory Lane after a thrilling race that saw the veteran drive around the pack on the high side, and then duel with Flyin’ Brian Lynn for the final laps to earn the win.

“Wow, didn’t expect that, the way the heat went!” Denney said with a big grin. “But when I took it to the top mid-race, it just took off. That one was for Randy!” Denney was referencing the late Randy Test, who was honored all night during the 3rd Annual Randy Test Memorial Race. Test was a long time supporter and familiar figure in the pits at the Speedway.

Denney actually made two passes for the lead on Lynn, swooping off the high line each time coming out of turn two to dart underneath the Mason City hotshoe. But on the first effort, Lynn returned the favor coming out of turn four as Denney drove in deep into turn 3 and had the car slide up the track enough that he had to back out of the gas. Lynn pounced on the opportunity and came back across the line in first as a caution flew for a spin back in the pack. On the restart, Lynn got the run down the back chute and took the white flag with the lead.

Denney made his move out of turn two, once again using a big run off the top of the speedway to shoot under Lynn heading into turn three. This time, Denney said, he “whoa’d it down real good going into three” and dropped the car all the way to the bottom of the track, hoping it would stick. it did, and it effectively kept Lynn from his preferred line, slowing his momentum enough so he could not get back around the red, white and blue #11 coming off the final turn. In the end, the two talented veterans gave the Saturday night crowd a great show, and Denney jumped out of his ride to a big cheer from the Spoon River Speedway crowd.

Logan Moody of Catlin brought his #162 home in third, followed by fellow teenager Kolby Vandenbergh and veteran Nick Bauman, in an impressive drive from the back to a fifth place finish.

In the Perkins Seed House Modified Class, Matt Goulden had one thing on his mind: get back what he lost the previous week. After hooking the cushion with a quarter of a lap to go and losing the lead with the checkered flag in sight last Saturday, Goulden was a man on a mission Saturday, dominating his heat race early in the night, earning him a chance to draw for his feature starting position. He drew the pole spot, and never looked back, winning the Randy Test Memorial $1,000 first place prize and big trophy to go with it. Goulden posed in Victory Lane with all four of Test’s children, who add money to the purse for this special night and purchase trophies for not only the Modified winner, but all Division winners.

Goulden was challenged only by a late charge by fellow Springfield driver Kelly Kovski. Kovski made a final lap charge into turns one and two, sliding up in two as he tried to hold back Goulden, but leaving enough room for Goulden to stay on the gas if he could get a run off of turn two, which he did.

Kovski pulled right in front of Victory Lane after the two went over the scales, jumped out, ran over to Goulden and gave him a big bear hug in congratulations on the victory.

“Kelly and I have been best friends for a long time, we love racing each other,” said Goulden. “He’s just as happy for me as I would be for him if he would’ve beat me. I wanted this one bad after last week, glad I got it, and happy for him that he ran so strong and finished right behind me.”

Mike Chasteen, Jr. took third, followed by Butch Weisser and Brian Lynn. Goulden, Floyd Jordan, Jr., Butch Weisser, and Chasteen, Jr. won the four Mod heats as a big field of 30 cars appeared in honor of Test. Fast time was set by Richie Biswell of Glasford, Test’s nephew, which drew a huge cheer from Test’s kids and the rest of the family in attendance. Biswell gave them a thumbs up from the infield after the final car qualified. Fairview’s Dale Munson won the B-main, necessary to narrow the field down to the top 20 cars for the feature. It was Munson’s second B-main win of the season.

Mark Anderson won his fourth Farmington Locker Pro Modified feature of the season, moving around the race track early to find the fast line. Anderson built a big lead and cruised to the win, Canton’s Todd Bates broke out of the pack behind him and started to reel the leader in late in the race, finishing second. Josh Smith took home third, followed by Josh Allen and Kevin Morrow. Heat wins went to Anderson and Andrew Schooley.