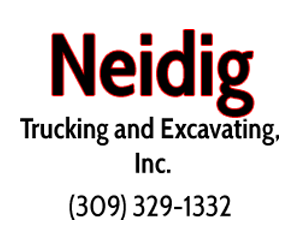 And as with all wins in the Modified Division at Spoon River, it was no “gimme”. Roberts had to hold off charges from Allen Weisser, Zac Oedewaldt, Zane Oedewaldt and Tommy Duncan to pick up the win on a hot, muggy August night, a night when the bottom groove of the race track was the place to be, and a different place to run for several in the division who’ve been favored the top groove this year.

“The top was real thin,” Roberts said, “so after a lot of debate, we decided to set up the car for the bottom and stick to it, and luckily it was the right one.”

Duncan finished second in the feature, followed by Zane Oedewaldt, Derrick Carlson and JD Beal. Late trouble for Weisser relegated him to 10th on the night, and early front runner Zac Oedewaldt jumped the berm at the top of the track but held on and came back to finish 7th.

Roberts and Duncan had each won heat races earlier in the night, after Roberts had set quick time over all in qualifying for the third time this season.

The Perkins Seed House Pro Late Model Division feature went to UMP National Pro Late Model points leader Nick Bauman, who pulled away early in part thanks to a terrific three car battle for second raging on behind him between Jose Parga, Evan Fink, and Brad Denney, who, after shuffling positions throughout the race with thrilling passes and outstanding car control, finished behind Bauman in that order. Bauman’s dad, veteran Fast Eddie Bauman, rounded out the Top Five.

Bauman’s big lead disappeared when a 19th lap spin by Kyle VanDorn set up a one-lap shootout to the checkers, but Bauman handled the restart and finished his dominating green-to-checker win.

“I kind of knew I had a nice lead because I couldn’t hear anybody around me there in the middle of the race,” said Bauman. “No, I really didn’t want the caution but I knew if I just drove my line we’d be alright on that last lap”. And he was, completing a sweep of his own on the night with fast time and a heat win. Fink won the other heat in a great duel with Parga.

The bottom was so good that even the driver most likely to set sail on the top side at Spoon River, Farmington Locker Pro Mod driver Mark Anderson, went to the low groove to win his 15-lap feature in that division, ahead of Josh Allen, Kevin Morrow, Todd Bates and Steve Passmore.

“The top was going to be tricky,” he said later, “and the bottom was good, so we took it down there and made it work.”

When asked later about the upcoming Rail Splitter Nationals, scheduled for September 26th, and paying a big $1,200 to win in Pro Mods,, Anderson came up with the line of the night in his four word answer.

The question: “So with the announcement of a huge purse for your division for the Rail Splitter Nationals in September, do you think the boys from down South will be here to battle for the big money?”The answer from Anderson: “I sure hope so.”

The gauntlet has been thrown down.

In the Fulton FS UMP Hornet Division, Derrick DeFord returned to Victory Lane after a one-week departure from his season-long domination, followed in the feature by Steve Jones, Dallas Strauch, Robert Mendenhall and Cody Maddox.